Its with immense pleasure and satisfaction that I portray my maiden trip to the land of Our Lady of Good Health. I had been longing to visit Vailankanni and it was with great excitement that I jumped at the chance of making the trip along with my relatives consisting of a group of seven devotees. Packed with food, cooking utensils and other luggage firmly tied to the top of the mini van we piled inside and started the night long journey to Vailankanni from Kerala, the Gods own country.

We passed through stretches of barren land, boards at regular intervals indicating the way to Velankanni, toll posts and beautiful rivers which zigzagged amidst lush green fields. We reached Vailankanni by two PM. Though I was longing for my first glimpse of the church, first decided to book a hotel room and refresh ourselves. Wide variety of hotels were available. We took a lodging near to the church where they provided us facility to cook our food. By four we were all ready and enthusiastic to go to the church.

The entire way to the church was crowded with shops on both the sides. Beautiful Christian melodies in various languages were heard through out. The moment a shop owner saw us he started playing “Malayalam” songs. We were so astonished as to how he found that our mother tongue was Malayalam. Should be the experience selling cassettes to tourists over the years that helped him infer our native. Sound of the waves lashing against the sea shore could be heard amidst these beautiful songs. 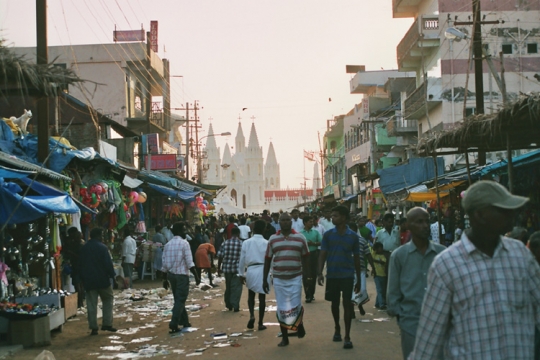 Young children selling rosaries, photos and rings of Mother Velankanni, imitation jewellery, toys and food stuff were seen around. As we moved closer to the church, many vendors came running with garlands, coconuts and candles. After buying the garlands and the candles we proceeded to the church. It was indeed crowded with people of all cast and creed.

The white storied architecture of the Basilica that loomed in front of us was the most beautiful site. Neatly paved stones surrounded the entire basilica. The whole place was kept sparkling clean radiating rays of hope and piety. This was with the help of more than two hundred and twenty-five workers. The Shrine Basilica had three churches – the Main Church, Annex Basilica and the side Church. In addition there was the Chapel at the Lady’s Tank. 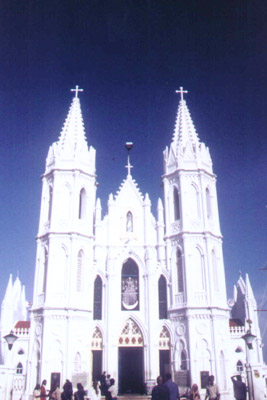 The main shrine had a main decorative arch built by the Portuguese. The high altar was decorated with rare porcelain plates that illustrated scenes from the Bible. They were brought by the Portuguese from China. The altar had Our Lady of Health with a child in her arms. She looked so beautiful wearing a red sari. (Sari is the typical dress worn by the Indian women. It consists of several yards (5 meters or more) of light material draped around the body in a particular fashion).

A statue of Jesus Christ was by her side. Devotees made their offerings on the left of the main altar. The pilgrims offer the Mother anything from cows, goats, paddy, tea, coffee, cardamom, oil and saris. When Annai (Mother) dons a new sari, given to her by a devotee, small pieces of her old sari are distributed to the devotees. It is called the “Blessed Sari”. We joined a long queue of devotees to offer our Mother the Garlands. It was collected by a volunteer who stood at the side of the altar and was handed over to another person who adorned the mother with the Garland. A second later, another volunteer took away the Garlands so that new ones could be adorned on the Mother. We could move from the main Basilica to the side wing. We had a side view of the Lady of Health with a child in her arms from this wing. After lighting the candles we proceeded to the main altar to kneel down and pray. No words can express the happiness and peace that I felt in the presence of our beloved Mother. 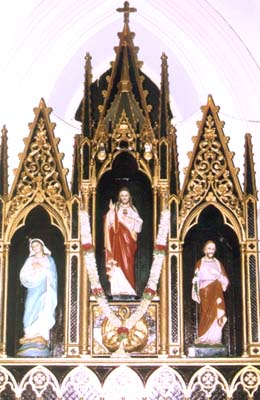 Jesus Statue Beside The Main Shrine

Two offering boxes were kept near the altar. One was for money and the other for gold and silver. The devotees make various models in gold and silver and present it to the Mother as a token of gratitude for the numerous blessings she has bestowed upon them. 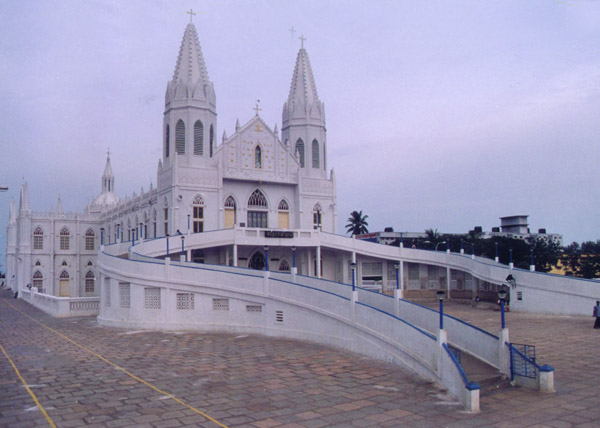 Entrance To The Annex Basilica

The annex basilica was built in 1975 and was used on special occasions like the annual festival. The entrance to the annex basilica was indeed the denotation of a wonderful aesthetic sense. Two long entrances on either side of the basilica lead to the entrance. The Gothic style of architecture was a unique feature of the church. Hence the the church itself was an imposing building with inspiring architecture.

A path strewn with sand, lead the pilgrim from the main shrine to the place where the Mother first appeared before a shepherd boy. This was called the “Holy Path”. On the left side of the path going away from the basilica were beautiful sculptures representing the life of Jesus on the cross, termed as the “Stations of the Cross”. On the right side were images representing the life of Mother Mary. Many devotees were seen pray with rosaries in their hands. This was named the “Stations of Rosary”. It was a common site to see the devotees of all ages and ailments walk on their knees along this path from the church to the chapel. 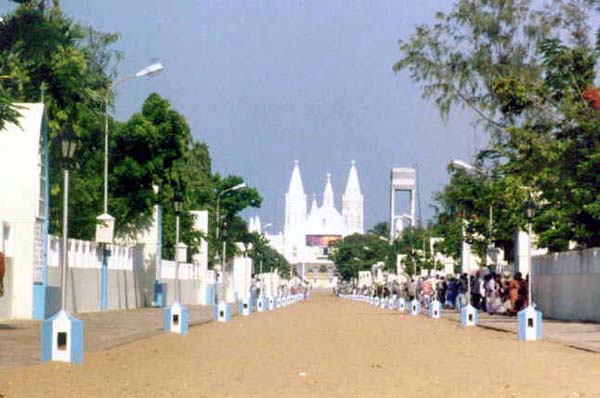 A lovely small chapel was situated at the ‘Place of Apparition’, called the Lady’s Tank. Here the image of Mother Mary accepting yoghurt from the boy was seen. The place where the Mother appeared is denoted with a lotus shaped tank known as the “Ladies Tank”. The church also had a hardware shop and a carpenter shed. There was another unit that manufactured soap and washing powder. A huge generator room that could supply electricity around the clock if the need arises was also seen. 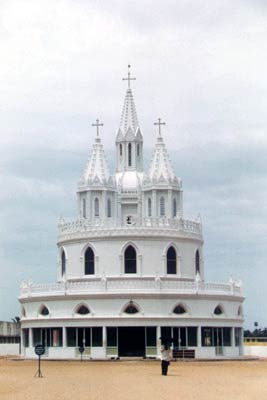 Chapel of Our Lady’s Tank

We next proceeded to the Church museum, which was in a building adjacent the Church. This museum was built to house the offerings which the devotees presented to the mother as a token of gratitude for the bountiful blessings they received. People had donated eyes, hands, legs, stethoscopes and hearts made of silver and gold depending on the ailment she had cured. Some had donated miniature gold or silver cars, cows and crosses. One person had even made a replica of the church with coins. These were kept tidily in show cases and were changed periodically.

The museum also had innumerable letters of gratitude to the beloved mother and lovely articles in silver and gold. Four large portfolios containing reports, letters, and declarations of the people indicating their gratitude were also seen here. On a shelf were pieces of wood which had floated
to Vailankanni from all over the world. The wood was hollow. People sent messages and offerings to the mother in those pieces of wood. Legend said that the messages always reach the shores of Vailankanni. Even coconuts with distinguishing features were preserved in the museum. They were considered to be the offerings from Fiji that had come via the ocean. It was indeed moving to go through those living testimonies indicating the God’s providence through Mary.

The church, which was spread over a very large area was exceptionally well maintained and green with lots of beautiful trees. A home for the Aged, an orphanage, the Mercy Home for the Handicapped and a hospital where people were treated at a nominal charge were all situated in that compound. Mother Teresa’s Missionaries of Charity ran a home for the aged and handicapped. There was also a higher secondary school , an English medium school and a girls school nearby. The church ran schools and chapels in four villages. 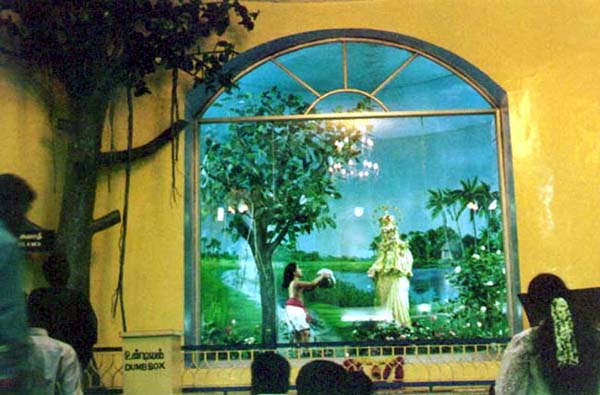 In fact the whole neighbourhood was an island of charity with multiple charitable and religious activities taking place. There was also an institution that offered a diploma in Mariology (study of the holy mother), affiliated with Rome. Around 15 students including laymen as well as members of the parish were enrolled for the course. A meditation centre and a retreat home with 80 rooms were seen. Here the visiting priests could stay for free, but had to pay for their food.

We saw childless couples tie numerous small cradles onto a tree. This was a way of beseeching Mother Mary for a child. Nearby was a ‘Tonsure Hall’ where pilgrims shave their heads. The Mega Mahal, with an area of 44000 sq.ft. was seen which could house hundreds of people. About 10,000 devotees could take part in the Mass Ceremonies conducted in this Hall, at times like Christmas, New Year or Easter. Outside the main shrine was a small chapel. It had an image of Annai with Jesus on her lap, after he is brought down from the cross. The flag pole was said to contain a piece from the original Portuguese ship which landed here.

Countless miracles and cures were attributed to the offerings. Many couples were blessed with a child after they prayed to the Mother. Countless number of diseases were cured. Many got jobs. Many parents could see their children happily married off. All of their tears were wiped away. Health, wealth and happiness came back to many a home with the grace of Mother Vailankanni. People of all religions visit Vailankanni throughout the year. Some come with worries. Some with illness. Some to say thanks. But they all exit from the church with an identical look of peace, serenity and satisfaction filled with the love of Our Mother who never says no to any request.

A trip to Valankanni is never complete without trodding on the shores of the Vailanakanni beach. As the dusk slowly descended down onto the Land Of Lady of Good Health, we slowly proceeded towards the beach. The beach, as expected was packed with people.

We sat and watched the sky fill with the red hues of the setting sun. The peace of mind we experience while we sit on the lap of our Mother Vailankanni and watch the vast ocean slowly swallow the fiery globe is indescribable. As the last rays of the setting sun faded, we too proceeded to our rooms with the hope of waking up to a bright morning to attend the first Mass.

Holy mother, Our Lady of Good Health please shower your blessings upon each one of us who cries to you for help. May this website be a helping hand to many, where we could post our prayers unto you and express our gratitude for the bountiful blessings you have showered upon us. In the name of Jesus Christ and Our Holy Mother, Amen.